The sculptural works of Davo

DAVO´s current sculptural work deals with the human body. Since taking her first state exams in 1985 she has discussed on nude female studies. After many years of working on abstract portrayals, she has now turned her focus on creating concrete figures.

Moving from completely stylistically free characters like “Avatar”, “Sun, Moon and Stars”, “golden wing” or many clusters (cluster I-XII), she has, with her small bronze figures, found her way back to concrete human forms again.

DAVO loves playing with different materials, creating different forms, searching for the most varied forms of expression. Therefore, she always tries to retain the freedom to seek, to find, to reject again, to try out her ideas over and over again in new series.

Her sculptural work has much in common with her series of paintings. Thus, there are some sculptures and paintings with the same themes (nests, flowers, trees). The human form was already expressed in her work as a painter. (1 Catalogue 2001, pages 75-87, “couples and other Passions”).The picturesque “pair” series, which lasted from 1998 to 2005, found a wide public recognition among publishers such as PGM and Euro Graphics.

The bronze series has again reached a level which relies on early experiences but includes new ideas.

Therefore, Dagmar Vogt’s work can indeed be categorised as figurative sculpture, but her sculptures never broach exclusively the character and hence are not aligned with the production of an objective realistic image. The artist cites various styles in post-modern fashion, in developing her very own formal language from the synthesis of highly detailed work and creating expressive gestures and facial expressions. It´s the classic sculptural topics addressed by Dagmar Vogt that are reconstructed with the help of new forms. Heads, figures and even a rider on horse-back are set in motion and seem to be constantly changing and developing.

DAVO’s figures are an unusual blend of Rodin, Giacometti and Henry Moore that display an amorous charisma. 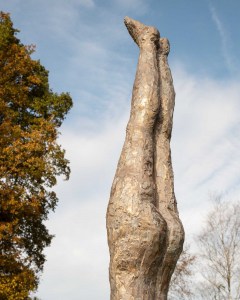